Why on earth did Mary and Ed write this dang novel? Well, we’ll tell you . . .

One day I woke up and couldn’t feel my fingers. They’d gone completely numb. I’d had a hot flash on occasion, and I figured, at fifty-ish, I was probably starting menopause. When I met with my writers’ group at our monthly lunch, I asked the other women if they’d experienced that. They hadn’t, but they sure had a whole lot of stories to tell.

One sweet, demure, mousy grandmother told me how she’d learned she had started menopause. She had been listening to her husband talk, and she found herself getting more and more agitated . . . to the point where she noticed she’d made fists. A strong urge to punch her husband took over her like a fever. It terrified her so much, she made a doctor appointment. And when she told her doctor, he assured her that no, she wasn’t going crazy; she was just in menopause.

And that sparked the idea for this novel (and the first two scenes in the book!) that set my feet on a mission to create the most hilarious romp about a woman who is (wonderfully) transformed by menopause.

Debbi Dickerson is not unlike millions of women who get blindsided by menopause. The Menopause Murders is meant to give comic relief and insights into the pains and agonies of menopause. It’s meant to help both men and woman suffering from this horrible injustice of nature understand the dynamics and challenges of menopause.

Surprisingly, in an era when politicians can brag about grabbing pussies (yes, we have that in the novel!), men can’t even buy a box of tampons for their wives without choking. Menopause is the last taboo, and we’re determined to break it!

I invited my friend Ed, crazy funny guy and menopause survivor, to coauthor this novel. I wanted to get a guy’s viewpoint, and while our loser husband Jerry is not one to admire or even pity, Ed brings great humor to this character, who no doubt represents a lot of men throughout the ages.

Ed helped me also to come up with some “good” men, who treat women right and try to be understanding as the women in their lives are at war with hormones. Ed lives in Nebraska, and I live in California (though I did live in Washington State for a brief time). We got together in person for a week when we were deep in the throes of writing chapters, meeting in Sacramento and taking over a small hotel’s conference room, surrounded by bowls of chocolates so that we could properly do our job and write good scenes!

I chose Tacoma, Washington, as the locale for a number of reasons, and I spent a week there a year ago to research the area. I’d never been to Tacoma, even when I lived in Olympia, and I really enjoyed the town and the great varieties of setting it offered.

I wanted my protagonist to be dealing with Seasonal Affective Disorder, on top of menopause (because you’re supposed make your main character as miserable as possible!). The Pacific Northwest has a lot of rain and gray days, and I needed a town that was big enough for some murders but not a huge city. It just turned out to be serendipitous for the plot to set this novel in Tacoma because of its homicidal claim to fame: Ted Bundy . . . who inserted himself into the novel in a huge way and almost steals the show. I personally feel he’s one of the best characters in the novel.

Want to know more about the book? Read some fun bits of scenes? Sign up for our newsletter and you’ll be kept up to date and, we hope, entertained. We’re putting out every effort to have this novel made into a movie or TV series. If you are a film producer or you know one who owes you a big favor, send them our way!

I wanted to write MM with Mary because I knew it will be very funny, but also because I thought the story hadn’t been told before. Not the story of the murders necessarily, but the story of the women—and the men, too—who have to live with menopause every day and never know what new challenges it will bring.

I think that’s especially true with men, who sometimes have no idea what is happening to their spouses. Mary and I tried to show this from both points of view and to bring out the humor in a situation that probably doesn’t seem to be funny at all.  So it was extremely important for us to emphasize the humor and show that one way to cope with menopause is to realize how absurd it is from the very start.

On the other hand, I think the novel also brings out the serious nature of the various treatments for menopause and the serious risks of many of the medicines available. Women are given basically two options: Hormone Treatment Therapy and holistic medicine.

There are side effects and dangers with many of the HMT drugs and some of the holistic approaches don’t seem to be remedies at all.  The women in our novel talk about and explore several of these options. I think we have written a timely, provocative, and funny novel that people are going to want to read and will thoroughly enjoy. 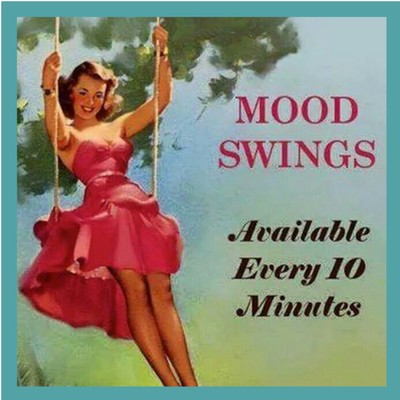 Don't miss out on the murders!

Join our mailing list to be notified when The Menopause Murders is out! You'll also get peeks at chapters and funny personal stories.

Got a great menopause story? Want to gripe and complain? You've come to the right place! Share your story with either Ed or Mary.

From The Menopause Murders...